Used: An item that has been used previously. The item may have some signs of cosmetic wear, but is fully operational and functions as intended.

There are three modules available, with two different overtravel forces:

which exceed the overtravel range provided in the SF / LF modules. The EO module has an additional 8 mm of overtravel in the probe Z axis to protect against damage to the probe body in such circumstances. Overtravel force is the same as the SF module.

The module houses the mating half of the magnetically held kinematic coupling (see 'Assembling a stylus on a stylus module'), which ensures repeatable positioning on the probe body. The coupling consists of three bearing points formed by the V grooves on the rear of the stylus module, which seat on three ball bearings located on the front of the probe body. The fourth V groove and semi-recessed ball form an alignment feature to ensure that the module has a unique orientation in the rotational axis. The module and stylus axis will be visibly misaligned if the coupling is not correctly seated.

Alignment symbols are provided to assist manual alignment. The module cover forms a sliding ring (see 'Probe body'), which transfers excess force to the case of the probe body if the maximum Z axis overtravel distance is exceeded. 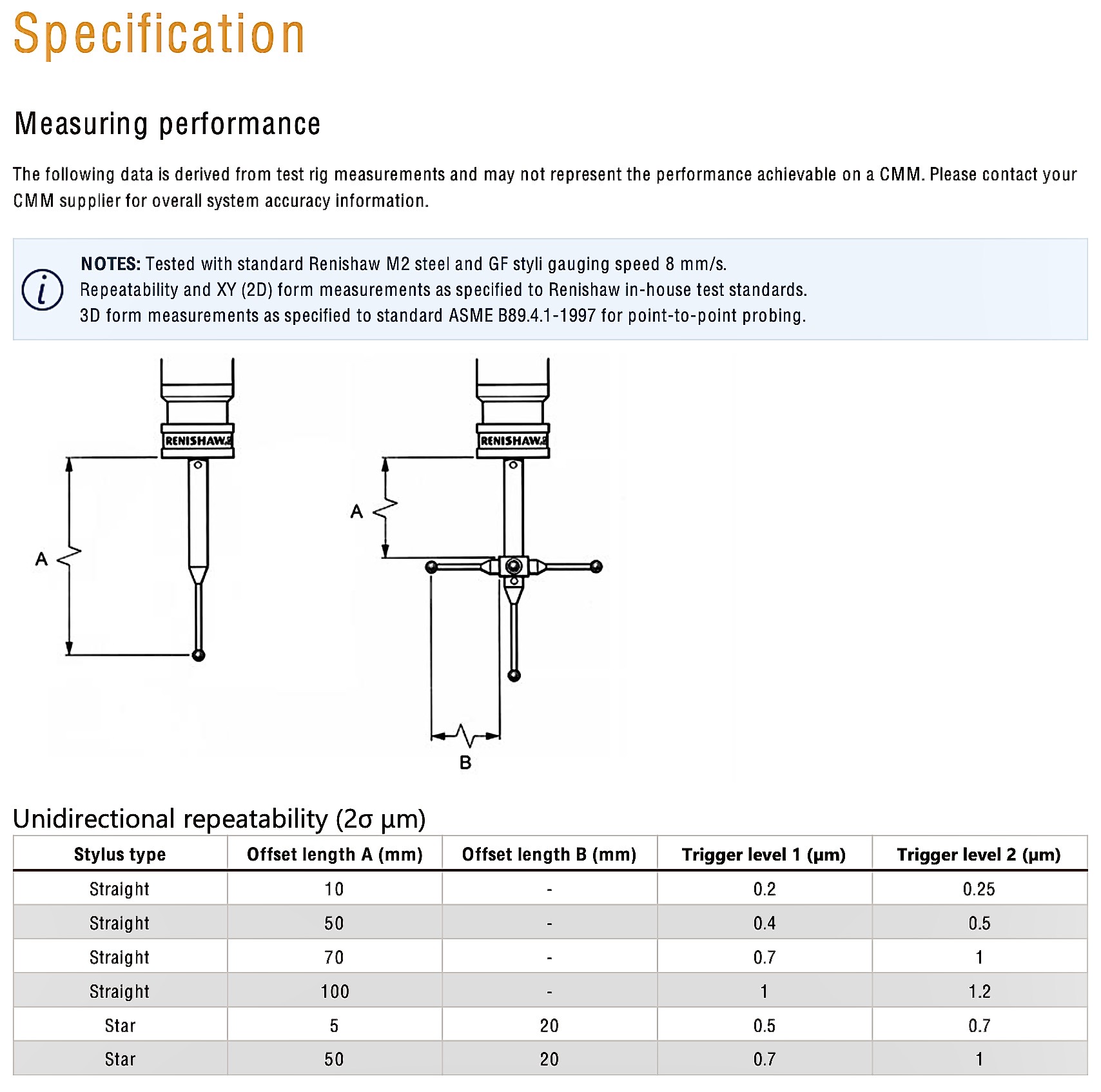 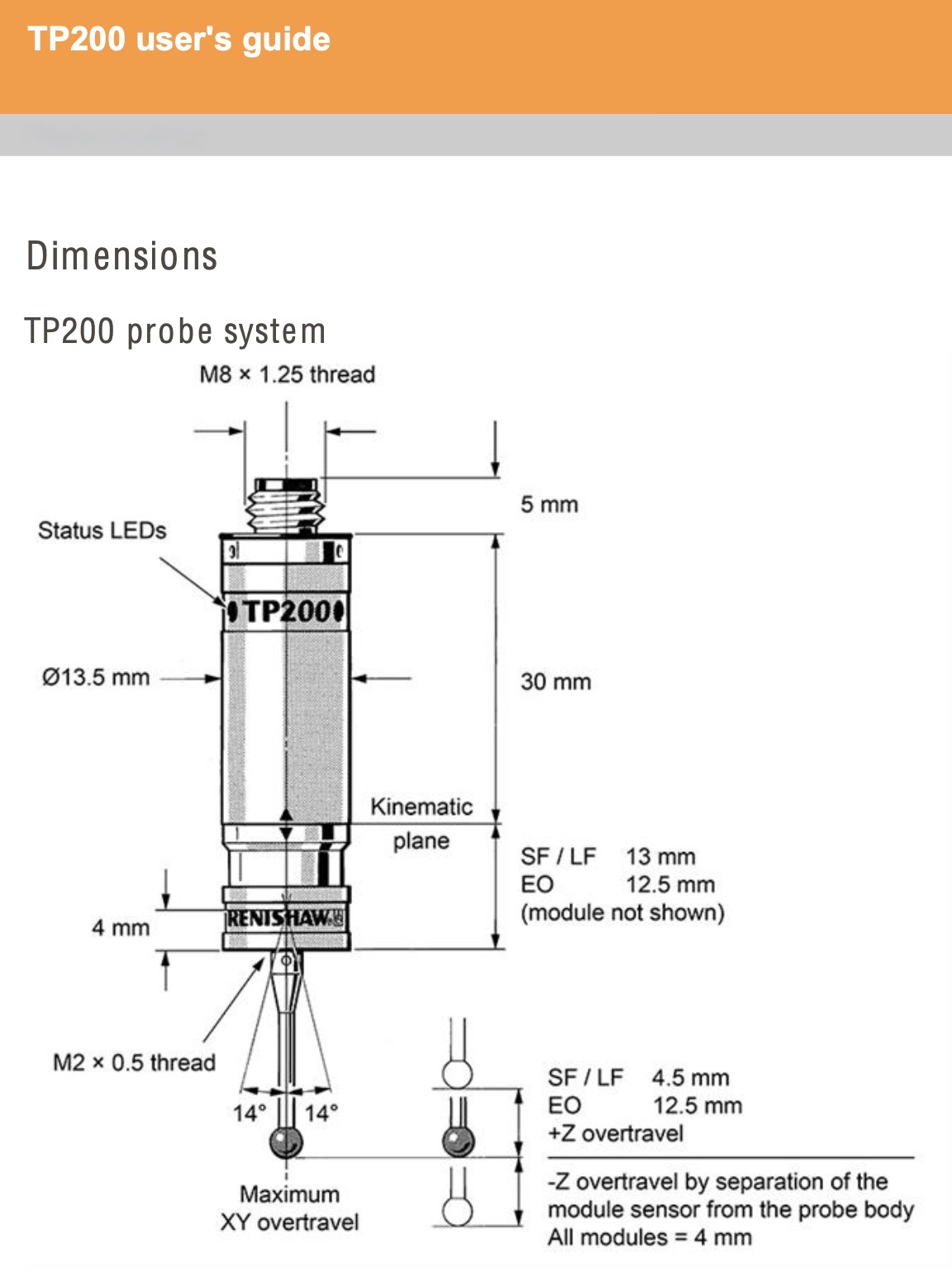 The TP200 / TP200B is a 13.5 mm diameter touch-trigger probe with the facility to quickly change stylus configurations without the need for requalification. Electronic strain sensing techniques are used to improve on the form measuring accuracy and operating life that can be achieved compared with kinematic touch-trigger probes.

The TP200 probe is a two piece design comprising the probe body and a detachable stylus module that holds the stylus assembly.

The stylus module has a choice of fixed overtravels: 'SF' (standard force) or 'LF' (low force). There is also the 'EO' (extended overtravel) module which has the same overtravel force as the 'SF' but provides increased operating range and protection in the probe Z axis.

The probe and rack are powered by the dedicated PI 200-3 interface, which performs signal processing and communicates with the CMM controller. 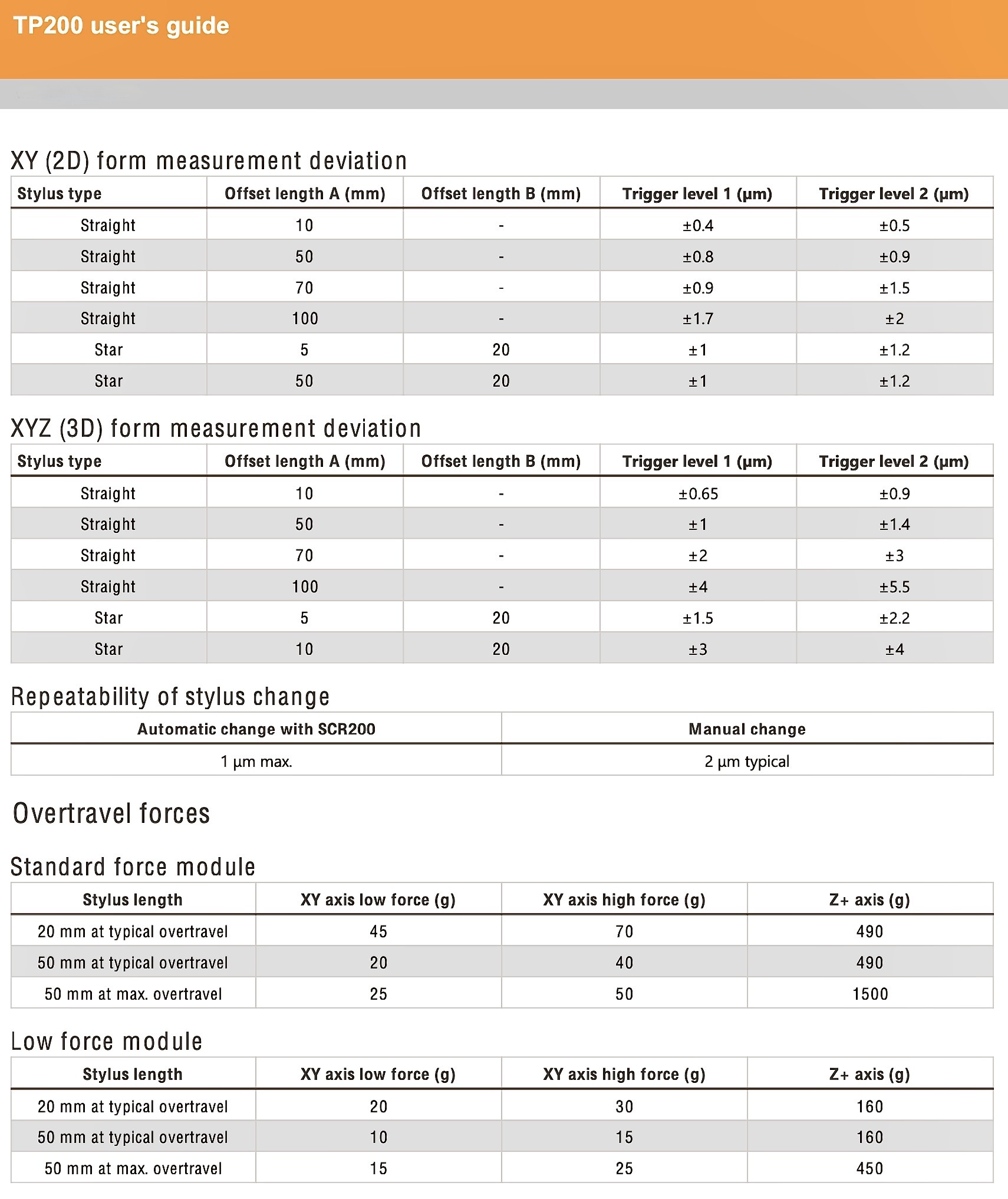 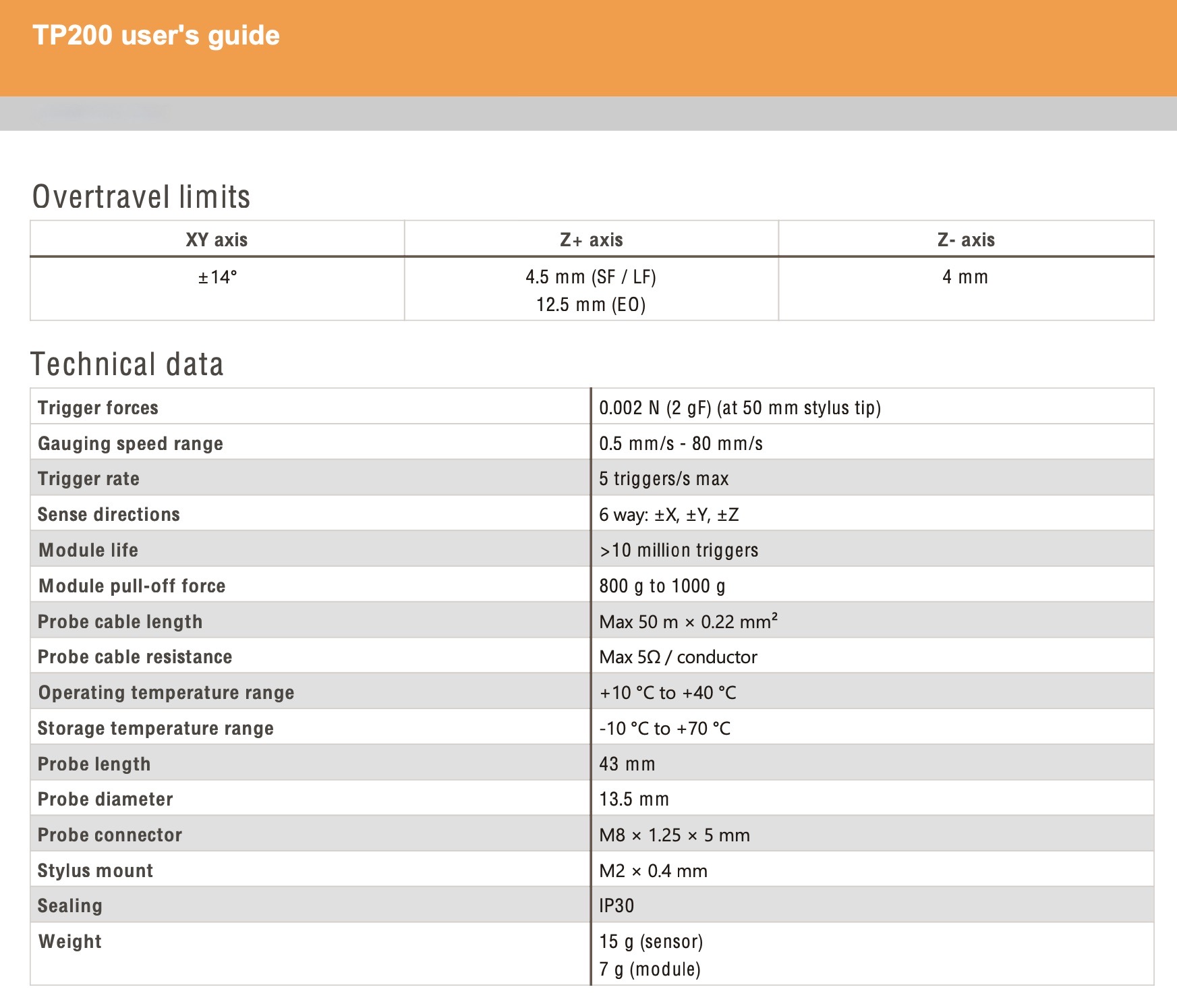 When the stylus contacts the workpiece, in a normal gauging move, the force applied to the stylus tip is transferred, through the stylus

module and the coupling at the front of the probe body, to the silicon strain sensors. A tip deflection of a few μm is sufficient to trigger the

probe. The probe's signals are amplified and processed in a hybrid microcircuit electronic assembly. The probe's data and control signals are communicated between the probe and the PI 200-3 interface over a pair of screened wires, allowing the TP200 system to be compatible with the majority of Renishaw probe heads and accessories.

The TP200B probe body uses the same technology as the TP200 probe body but has been designed to have a higher tolerance to vibration. This helps to overcome the problem of 'air' trigger generation which can arise from vibrations transmitted through the CMM or when using long styli with fast positioning speeds.

When automatic stylus changing is performed using the SCR200 change rack, the PI 200-3 inhibits probe triggering and resets the TP200 / TP200B probe to account for the loading effects of the new stylus assembly on the strain sensors. In the event of rack overtravel or error condition, the PI 200-3 transmits signals to the CMM controller to stop CMM motion.

During high speed position moves (fast traverse), it is necessary to reduce probe sensitivity to prevent vibration causing unwanted triggers. The CMM controller automatically switches the PI 200-3 into a low sensitivity mode, such that vibration triggers are prevented. However, a trigger is still issued to stop CMM motion, if an unexpected collision occurs. This mode is known as ‘probe damped mode' and is indicated by an LED on the PI 200-3 front panel.

Fully Tested with 90 Day Warranty. Why pay retail prices when you can purchase with warranty

from Metrology Parts. Purchase with confidence from a Paypal verified retailer. If

for this sale. Metrology Parts would like the opportunity to earn your business for this

sale and all of your future Renishaw needs. If you have any questions feel free to contact us.

application needs as well as your after sales support